The very first Bridgestone tire was produced on April 9, 1930, by the Japanese "Tabi" Socks Tyre Division (actually made jika-tabi). One year later on March 1, 1931, the founder, Shojiro Ishibashi, made the "Tabi" Socks Tyre Division independent and established the Bridgestone Tire Co., Ltd. in the city of Kurume, Fukuoka Prefecture. "Bridgestone" was named after the name of the founder, Shojiro Ishibashi (Ishi = Stone, Bashi = Bridge).

Foregoing dependence on European and North American technology, the Bridgestone Tire Co., Ltd. set its eyes on manufacturing tires based solely on Japanese technology. The foundling company experienced many difficulties in the areas of technology, production and sales in the early days. Eventually, improvements were achieved in quality and manufacturing processes which led to the business rapidly expanding on both the domestic and overseas markets. 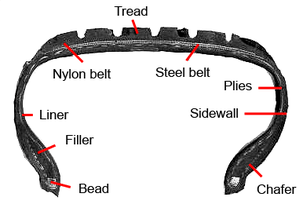 In 1951, Bridgestone was the first company in Japan to begin selling rayon cord tires, and a five-year project to modernize production facilities was started. This year also saw another Bridgestone building opened in Kyōbashi, Tokyo, which contained the Bridgestone Museum. Sales surpassed ten billion yen in 1953, placing Bridgestone at the top of the tire industry in Japan, and celebrations were held to commemorate the 25th anniversary of the company's foundation in Kurume.

The sale of nylon tires was started in 1959, and work forged ahead with the construction of the new Tokyo plant, which was opened in 1960, in order to cope with the fast-expanding market for motorization.